Catching up after two of our busiest weeks.

It’s over – the final AQTX TISCA West Region Spring Festival, and it went as well as it possibly could have. Thank you to everyone who volunteered to make it the smoothest one we’ve ever run. Because high school water polo will be run by the UIL in the fall, we as a club will no longer be able to host such an event, something we consider a good thing altogether. And don’t worry, we’ll be hosting other events in its place.

So thanks again for everyone’s hard work and congratulations to all our athletes who got to put their skills on display over the weekend. It’s very exciting for coaches to see your hard work paying off. Keep it up! You can find final results for the tournament on its events page.

Belated huge congrats to Tristan, William, Rudy, and Wes for taking home 1st prize medals for the Longhorn 14u and 12u teams competing in the silver bracket of the Thunder Spring Invite. Their teams went undefeated over the weekend. And as a reward, as Coach Tom and I mentioned to the teams, we won’t be entering any silver brackets in the foreseeable future! A great result and congratulations to our four players and our friends from Longhorn. Final results are here.

Kendall will finish her spring break in NorCal for the girls’ championship. She and her Southwest Zone Youth team will take on the Central (CA) Zone on Saturday, March 19. Best of luck to her and her teammates, and congratulation to Tristan on a great ODP season.

The next ODP season will begin in September and we will be pushing our athletes to try out more than we have in the past. You can keep tabs of what’s going on with the program via USA Water Polo’s ODP page.

We’ve gotten feedback from a lot of you but want more! Are you interested in playing at Junior Olympics this summer? We will share a google form for you to fill out in our GroupMe (contact Coach James if you need the link to our GroupMe).

You can read more about the summer schedule via our Southwest Zone JOs Qualifier event page. With our friends from Longhorn our plan is to attempt to qualify all our boys’ teams for Session 1 in California. We are still getting feedback from the families of our girls about competing in California versus playing in Session 3 in North Texas. But if you’re planning on playing on one of our boys’ rosters (and you should!) then you should know we plan on qualifying for a trip to California. If any of our teams don’t qualify for CA we will play in Session 3 in North Texas for certain.

We have an influx of new members as the high school season has arrived and are very pleased to have them. To all of you who joined recently, welcome to AquaTex Waterpolo. Take a moment to read our Welcome page so you know what next steps are. Most importantly, all AquaTex athletes must be both registered with the club and have a current membership with USA Water Polo. The minimum level of membership that will cover your athlete is “Bronze,” although there is also a 2-week trial membership. Families must register with USA Water Polo directly. We as a club cannot register your athlete, unlike with USSwimming.

Thanks again for joining us! 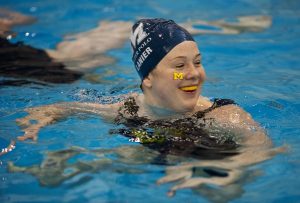 The newest addition to our coaching staff is Barbara Lanier, a former varsity player at the University of Michigan, one of the top ranked programs in the nation, and at Acalanes High School in Northern California. She also has significant coaching experience working with Saline High School in Michigan and Diablo Alliance Water Polo in California, where she enjoyed both polo and summer league swim coaching. She will immediately fit with our Swim2Score program, which she’ll run on Sunday, Feb 20. You can expect to see her doing more than that since she has experience working with all age groups. This as we round out our staff and increase the number of athletes at AquaTex. Welcome, Coach Barbara!

We’re all set with our (Longhorn) teams participating at the Thunder Spring Invite. I’ll be up there along with Coaches Tom and Becca of Longhorn. There are lots of hotels nearby for those traveling to the very nice Lewisville ISD Westside Aquatic Center. Feel free to use the GroupMe among our families to organize before and during the tournament. Stoked for our young AquaTexans!

We’re two weeks away from hosting our last ever Spring high school tournament. Current AquaTex members should have received an email on Thursday introducing many to our volunteer needs for the event. We have more members than we ever have so we should have plenty to cover all our volunteer needs and more. High school teams have until Feb 25 to register after which we’ll publish a schedule as soon as possible. Expect to see more about volunteering soon, and let’s keep this one of the best-run high school tournaments in our area.

AquaTex is working on creating extra training for high school-only athletes beginning on or around February 28 and ending around May 1. Details are forthcoming but sessions are likely to be on multiple weekday mornings from 7-9 AM and are available to any registered AquaTex water polo athlete currently in high school. There will be no changes to our Monday and Wednesday evening training sessions, to which all high school athletes will also have access. Middle school athletes will remain on their Monday, Wednesday evening, and Saturday/Sunday morning schedules.

‘Tis the season to decamp to the lovely, wonderful Lake Creek pool. That move will take place after we host our tournament, March 4-5. More details to come as usual but… be prepared.

See you on the deck.

Catching up on a lot of stuff so here we go.

Big thanks to Coach Alon for spending all Sunday the 30th in San Antonio watching our teams perform well at the South Texas Winter Championships. Here’s his recap of the day:

The AquaHorns fought hard bright and early to start the day against Zilla. Aaron Gordon won all 4 swim offs and led the team counter attack. Jacob Gerakos and Jake Roberts alternated in center and the team, especially Luca de Araujo from the 4/5 side, did a great job working the ball into center. Kendall Strauss and Cruz Crowley both had several stellar defensive plays throughout the game. The team ultimately lost to ZIlla in a shootout.

Next, the team matched up with Alamo Area. While the team executed defensively, they were unable to convert a number of key offensive opportunities that cost them the game in an 8-6 loss.

Our 14-U AquaHorns played some real water polo this weekend. It was a great opportunity for some younger players to get some solid game experience and playing time. We opened with a strong win against Zilla, followed by a 1 goal loss to Longhorn, and finished with another strong effort against Zilla. Gavin Hantelman scored his first tournament goal in the first game. Tomas Bellavia had a notable defensive performance throughout the three games. Jacob continue to impress out of center with some quick shots under pressure. Kelly Murphy was a big defensive help for the team, as well as a leader on the counter attack with James Strauss. Overall, it was an impressive effort for a team of various experience levels.

Our 12-U showed up ready to fight—almost at bedtime—Sunday night. Despite missing some key offensive players, the AquaTex team was able to put 10 goals up on Alamo Area. Rudy suffered from a ball to the nose, taking him out for part of the 2nd quarter of the 1st game with a bloody nose. Not easily shaken, he was right back in the water at the start of the 3rd quarter! Isabelle Morrison scored an excellent high corner goal on the counter attack. Silas and Tomas alternated in goal and the field, each taking a leadership role both offensively and defensively for the AquaTex team. Wes (John) Kelly and Ryan White played reliable press defense, each proving they are picking up on the fundamentals we teach them in practice.

We we also part of some very strong Longhorn teams including our usual 16u boys team, which went undefeated, and our awesome Swim2Score athletes Ryan and Ashton playing on Longhorn White 10u. It was a very good Sunday for the club.

Roster call for the next USAWP tournament of the spring season up in Lewisville February 26-27. Check out the event page and mark your commitment on the sheet we shared in GroupMe. Note that it is only for athletes age 14u and that the age is determined as of August 1, 2022. As usual we will partner with Longhorn if necessary. Let’s go!

Coaches Alon and Matthew are playing for Longhorn Masters this weekend at the Spin Lob Classic at UT. It’s one of the premier masters tournaments in the US and features a lot of US Olympians and other extremely talented players. If you’re in Austin on Sunday in particular (prior to the Super Bowl) watch the final matches, likely to feature Olympic Club and/or New York Athletic Club, both of which are loaded with Olympians. Pegasus Dallas Masters has also emerged as one of the best teams in the US. Don’t miss practice but if you’re near UT go check it out.

Also, a team from Barbados Water Polo will be loosening up, scrimmaging at Micki on Friday at 8:00 PM with Coaches Alon and Matthew. All our high school athletes are encouraged to hop in with them and get some good game experience.

We’re just a few weeks away from our final Spring Festival, a high school tournament we’ve hosted for several years. Families can expect to see a volunteer sheet soon, and athletes will be assigned to work the desk during our matches. Jobs include concessions, course setup and breakdown, managing hospitality for referees and coaches, and more. As a member of our club all our families are expected to contribute to hosting efforts so thank you in advance.

The number of clinics available to our athletes is ever increasing and we’re getting questions about which ones are best suited to our athletes. One that is relatively nearby and that will feature one of the best coaches in Europe is the Pegasus Spring Break Camp at SMU with sessions stretching between March 12-19. We definitely recommend that one, but know there are many others in California too. Give us a shout if you want our input about who’s running these clinics. Stoked that so many of us are interested in getting better at one or more of these events.

With the weather improving (finally!) we’re putting the call out there to give our Swim2Score program a try. For young athletes age 5-11 who want to learn both good swim technique AND throw a ball around in the water. One-hour sessions with our creative and fun coaches, Sundays at 10:30 AM. Contact us for more info and come give it a try twice for free.

My old friends from Zumo are having a gigantic blowout sale. If you’re looking for water polo OR swim training suits at half cost (including the ones already on sale – high quality women’s water polo suits for less than $30!) I strongly suggest you check them out. I just ordered a bunch of balls from them and may do even more.