It was an historic week for AquaTex. In past years we’ve happily partnered with Longhorn to send all our athletes to JOs. This year we sent two AquaTex teams and plan on doing more of it in the coming years.

Meanwhile, the Longhorn 10u coed team, featuring AquaTex’s Grey and Ryan Benson, won a full-on Gold Medal, beating Thunder in the final match. It’s been a spectacular summer for our 10u and 12u athletes. 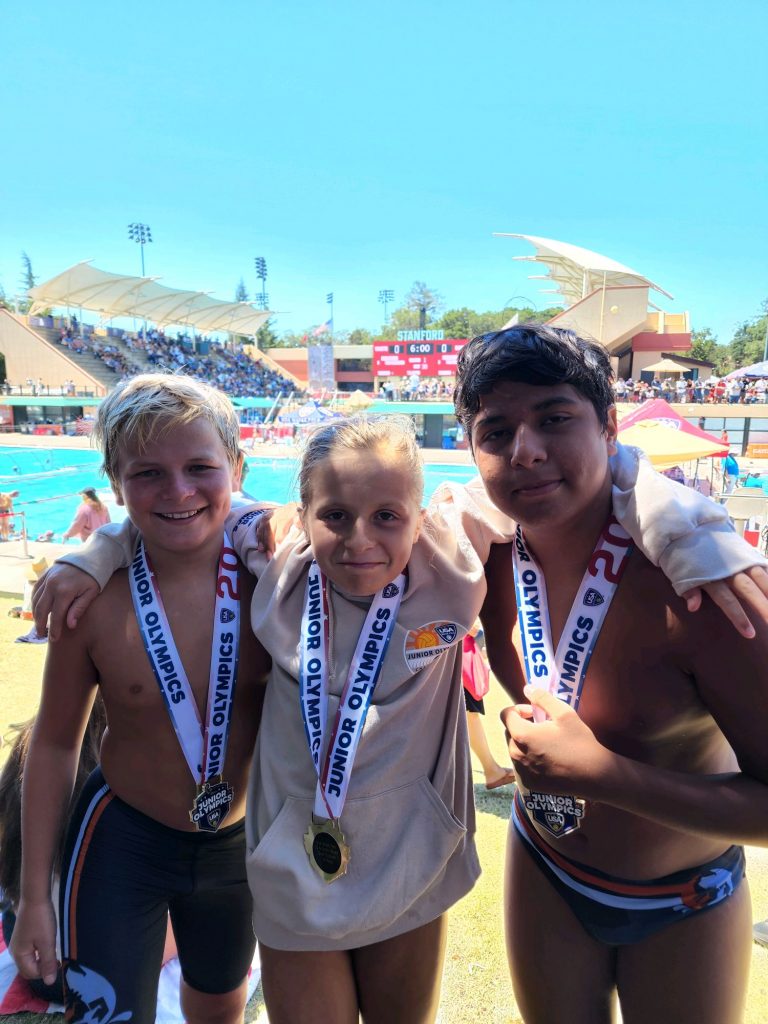 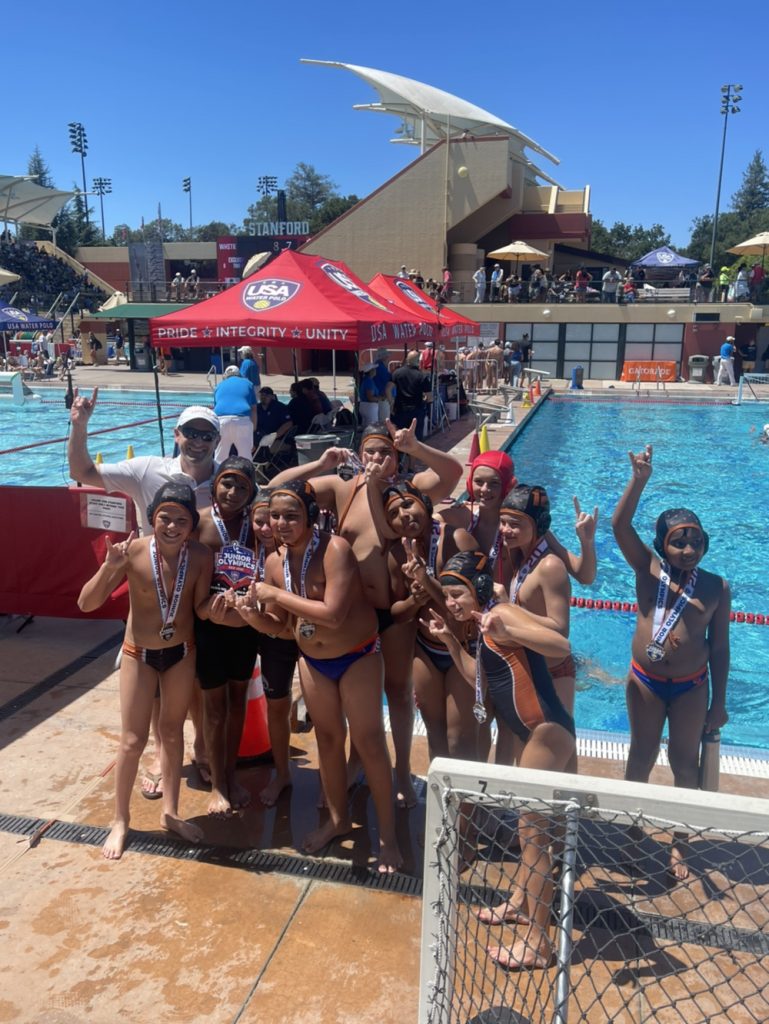 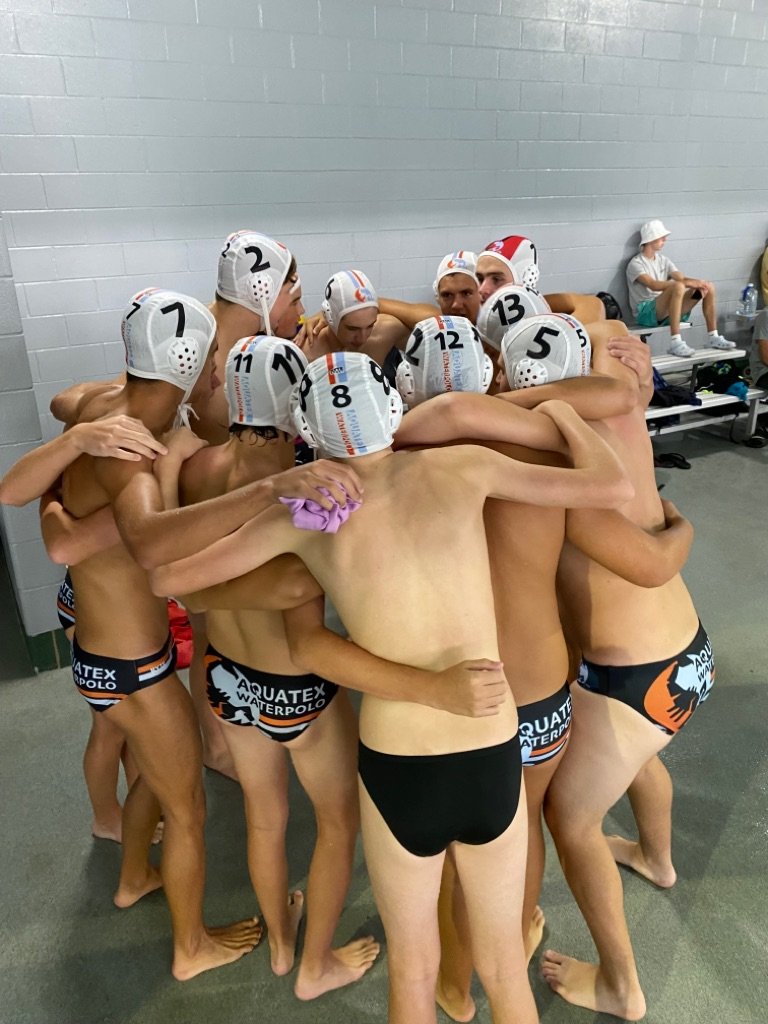 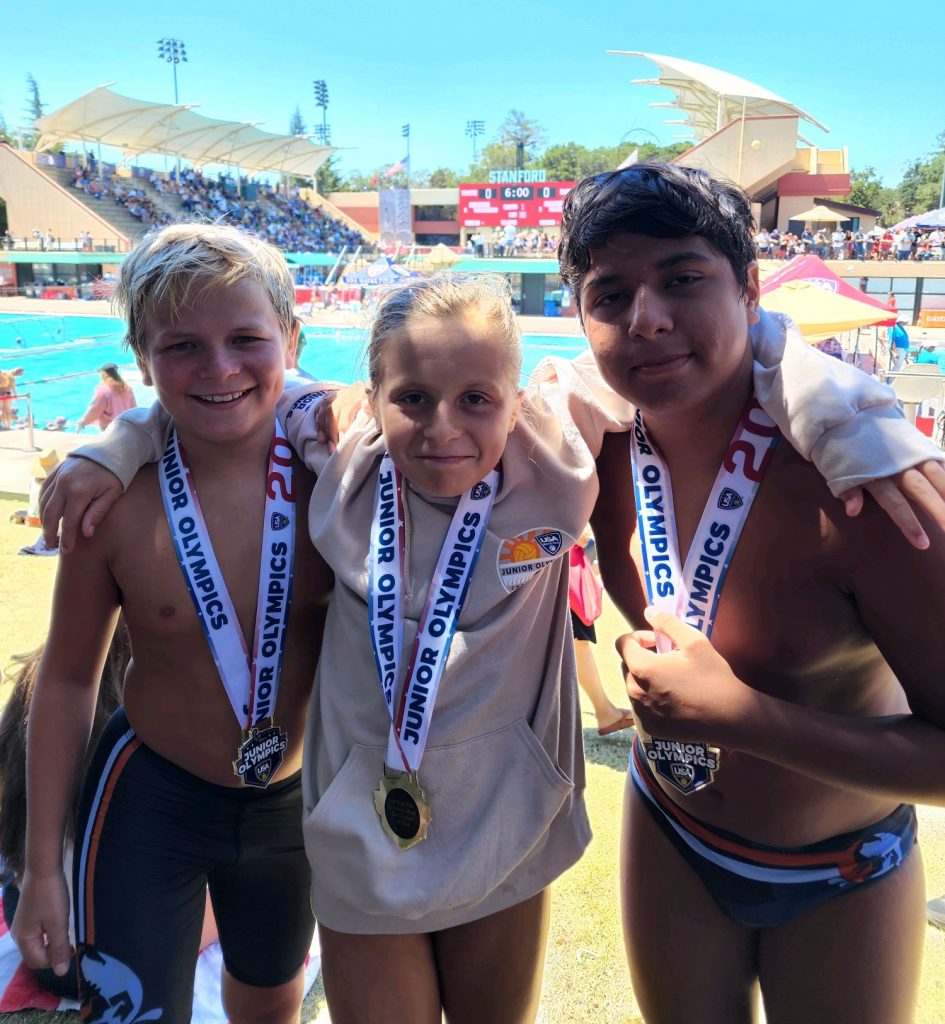 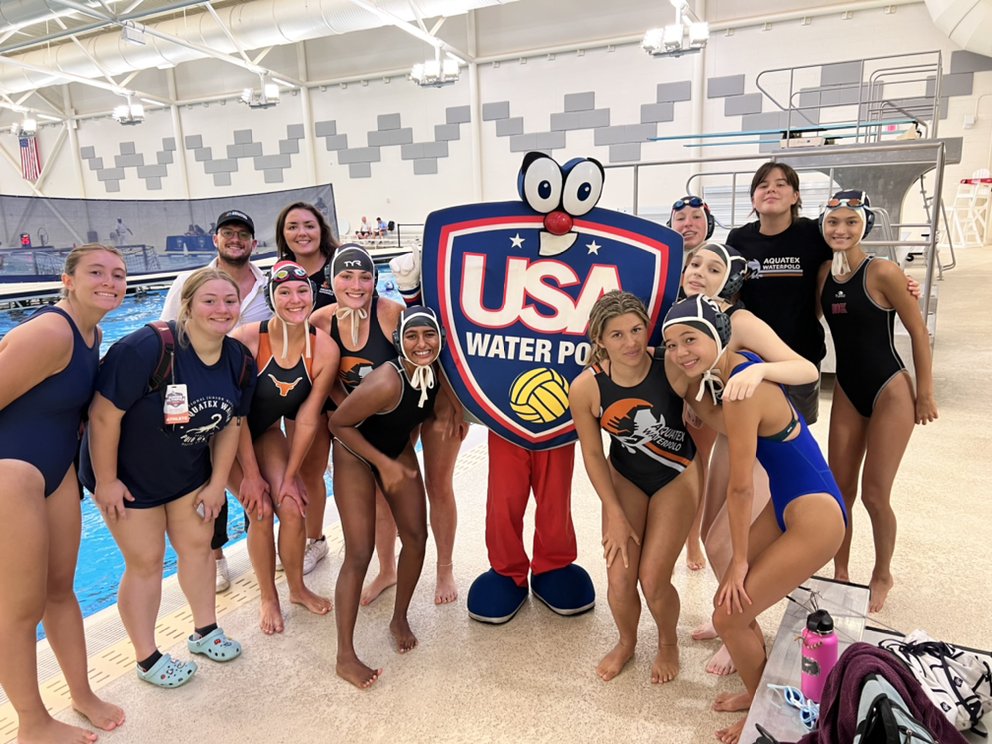 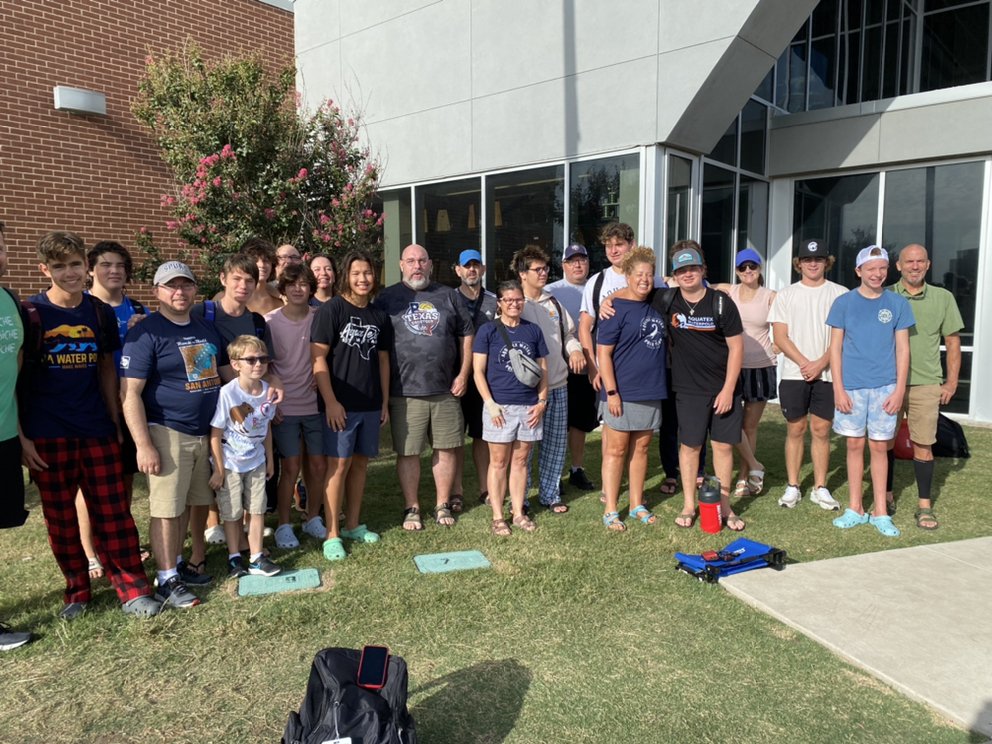 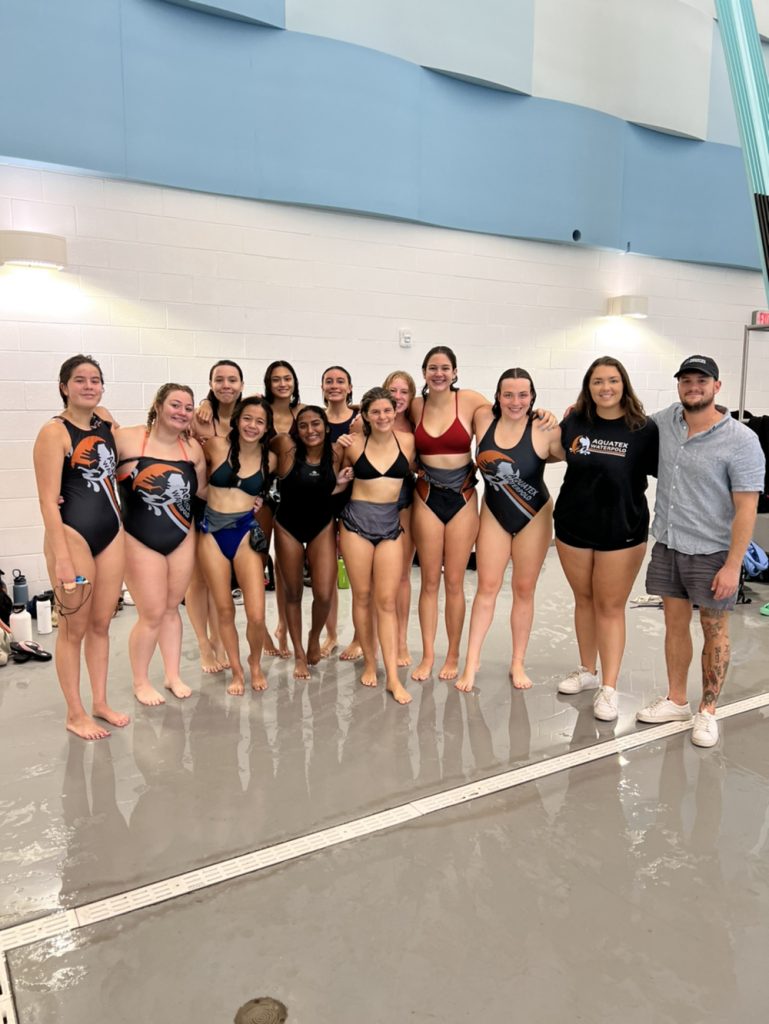 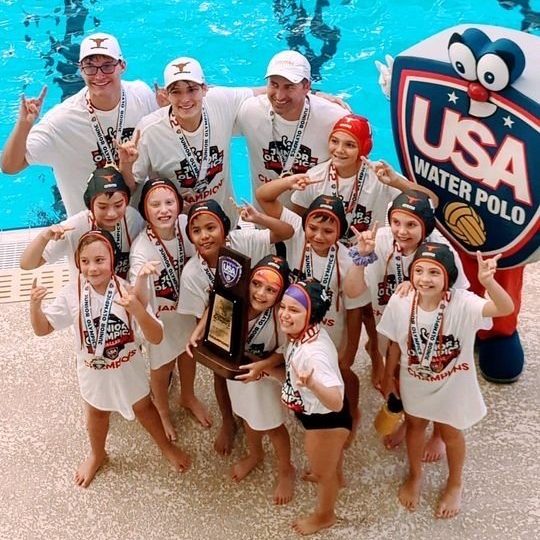 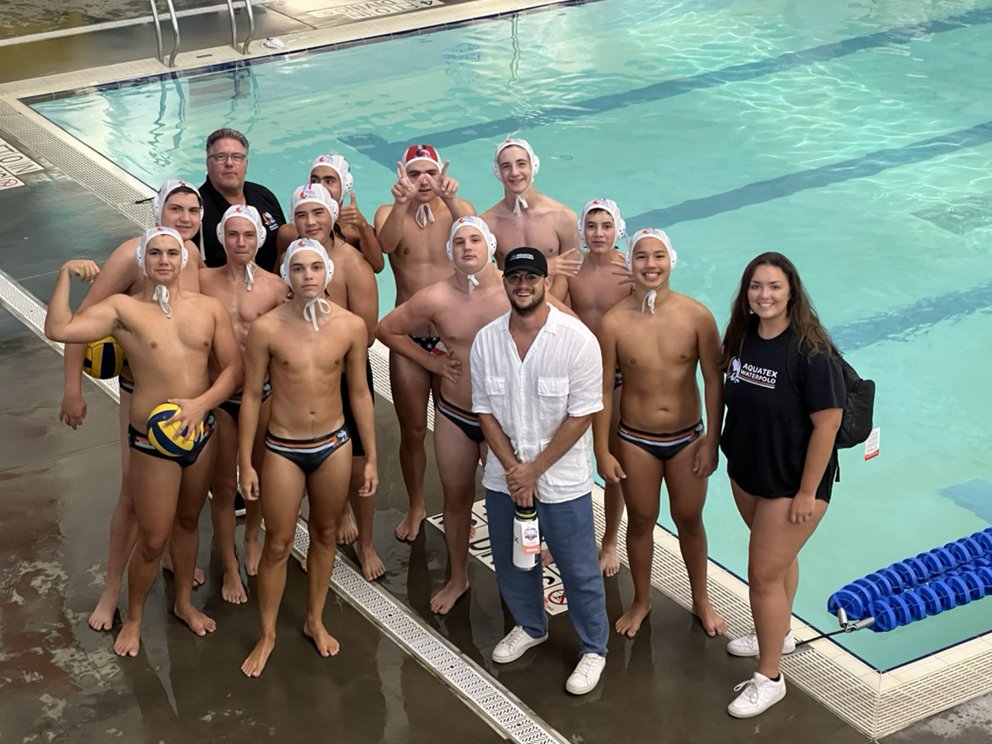 Our 16u boys improved four places over the Longhorn team that competed in 2021, finishing ninth in the Gold bracket and with a 5-4 record. The boys were the only Gold bracket team to beat Colorado, the club that won the bracket championship.

Any mention of individual players risks leaving others out of the conversation, but particular credit to Declan, who was a defensive monster all tournament, and “Waco” Will, who provided us with the goalkeeping stability we needed. Luca and Max locked down that left-hander side producing the bulk of our non-counterattack goals. Riley showed center skills that surprised both our opponents and this coach (I’m still not sure how a couple of those goals happened). Gavin was a dynamo, improving his defense throughout the event. James, Adlee, and David gained truly important experience and showed improvement, especially defensively, as the games progressed. Jacob was our super-sub center who knocked the defense off balance and showed tremendous effort all week. Matthew showed huge potential and great instincts for a newcomer, while Finn (still in middle school!) was fearless, especially defensively, against a lot of larger, older dudes.

We played a good variety of teams from throughout the US. You can see our final results below, a roller coaster of wins and losses, with an extremely memorable end to the tournament: a penalty goal by Riley with zero seconds left in the game vs. Raider from Miami, Florida. It’s so great to end JOs with a memorable finale. And now we look forward to 2023…

By Coaches Kendall and Alon

Right out the gate, our young team had the opportunity to experience both the Florida and Chicago style of play in their first two games against Orlando and Chicago WP. Though we fell to both teams, Morgan  led our team with multiple steals and a goal in each game.

During day two the ladies faced off against the Southside Honey Badgers from Houston TX, where they held the team to a one goal game until the second half where a few players had to sit out due to penalties. Nichole Wood put the team in a great position at the start of each quarter by winning three out of the four sprints. Corina Nunziata led the offense with 4 goals that game, and stepped up to the role of being the team’s primary center for the first two days of the tournament.

The second game the ladies took on another team from Florida called Raider. Kendall Strauss entered the playing field (with a broken finger on her shooting hand!) and put a couple of goals on the board for her team while Katya Ortiz shut down the middle of the pool on defense.Day three took the AquaTex girls all the way to the Northwest ISD Aquatics Center where they played the Texas team Maverick. Though the team didn’t see a win that game, we did see our goalie, Addison, make some key blocks and Akirti helped the team’s defense by putting her player under major pressure. The ladies found victory later that day against New Mexico’s Duke City, with goals from Morgan, Corina, Nichole and Kendall. Molly never gave up any goals on defense and Kailee showed major defensive improvements. Kelsie kept the defense on their toes with drives and post ups.

The last day the ladies ended with meeting Southside in the pool again and fell to the team’s strong offense and counter attack strategies.

All in all, our young players saw much improvement in the short course of 4 days. Coaches Kendall and Alon look forward to seeing the girls take what they learned from this tournament into the first UIL high school season, and wish Kendall Strauss the best of luck in her first year as a collegiate water polo player!

Return of the Champs!

Let’s kick off the email with a huge shout out to our 10 and under team who successfully defended their 2021 title and secured a gold medal finish in the Platinum division of Junior Olympics Session 3! The 10Us capped off their title run with an impressive 11-6 victory over Thunder in the championship game. Congrats to all our athletes, coaches, and parents that worked hard all year to bring the gold back to Austin!

We’ve gotten a TON of new interest in water polo and the club (thanks and welcome to you all). One of the most common questions is, when’s practice? So here you go:

Age Group and High School (including 10u athletes approved by coaches)

With our new programming that includes age group training for 10u, 12u, and 14u athletes, plus plans for a Novice group for those who need a little extra attention before “graduating” to Age Group training, we’ll be working out the schedule a bit as we go. For now, the schedule will remain nearly identical to the August 16 – September 1 schedule above. But we may need to increase the number of practice days to accommodate our new young, and novice athletes. It’s a very good problem to have and we’ll address it based on the numbers that register with the club. We’re fortunate to have access to more time at Micki, and we’ll take it if necessary.

Our focus is entirely on Age Group water polo this fall. There is no club competition for high school-age athletes until November. So, we ask all our 14u, 12u, and 10u families to put these tournaments on the calendar. We will try to send teams to each one of those events (with Longhorn if necessary but preferably as AquaTex). Our key aim this fall is to prepare for and compete at TAGS on November 19-20. That’s the goal. Everything we do this fall is geared to being as good a team as we can be at TAGS (the unofficial “middle school” championship, BTW).

Obviously, after the high school season is complete we’ll ramp up competition for those athletes too. Can we win the Cowtown Stampede in December again?

We’re really excited to have so many newcomers in those younger age groups. So get ready to compete because that’s what we’re going to train you for as quickly as possible! #OneTeamOneDream

That’s right, it’s August, which means that if you were a club member on July 31 and haven’t gone back in to TeamUnify to re-register, then technically you’re not a member of the club! Please do it prior to your next practice. And if you’re a newcomer, please do the same. All water polo athletes must be registered with the club and with USA Water Polo in order to train with us.

The Turbo store is open again until September 18. After it closes on the 18th is when the products will be ordered and shipped. Identical suits from RYTE are available at any time and ship within weeks (I love Turbo but the RYTE suits are cheaper, more available, and high quality. I think you know my preference…). Now is the time to order a new suit if you don’t already have one. All registered AquaTex youth athletes (not masters or Swim2Score) are required to have an official team suit and now’s the time to do it. Grab a shirt while you’re at it cuz it’s also required. Oh, and Coach Alon, you should get one of these (I ordered one).

You’ve already read about our programming plans. Well we need more coaches – always. If you are aware of anyone, a high school or college graduate who aspires to get in to coaching, please steer them my way. Water polo experience is preferred but not entirely necessary (we can teach you!). Again, it’s a good problem to have but we can use your help finding new coaching talent.

All training between Friday and Sunday, July 29 through 31, is cancelled. That includes high school, middle school, masters waterpolo, and Swim2Score. . [Nope. We’ll continue training throughout with a change of schedule beginning on the 16th. Read the latest.]

The schedule after August 16 will likely revert to one similar to that of the fall of 2021. Plans are for four practices a week if not more, including Saturdays and Sundays whenever possible in order to take advantage of the deep water (Saturdays may be quite busy given the first ever UIL high school season).

We are planning some exciting changes in programming beginning this fall. Details need to be hashed out so nothing is written in stone, but the tentative plans are:

A reminder that EVERY member of the club is required to re-register via our TeamUnify site on August 1 of each year. It is an annual thing for all our families, swim and waterpolo. Registration is currently closed but please don’t delay once August 1 arrives. This goes for current families and those who have joined us in just the past couple weeks (thanks for that!).

So, this awesome thing happened in case you didn’t already know.

Session 3 is basically here. The main schedule, ticket info, and lots of other stuff (including a link to the official USAWP JOs page) are available throughout the tournament on our event page. Bookmark it!

I’m excited. Lots to look forward to. See you on the deck.